If you would have told me 10 years ago that I would be an auto racing fan, I would have told you that you were crazy.  I was then introduced to NASCAR by one of my dear friends back home and became immediately hooked.  The combination of unhealthy food, track air, sunshine, and speeding cars made me a race fan for life.

One of the contingencies of this relocation was if I was moving to Shanghai, I needed to attend a Formula 1 (F1) race.  After a six-day workweek I was ready for some speed therapy.  While the F1 race was an awesome time, it was a tad bit different from my prior race experiences.  So, dear readers, here is my summary of how F1 stacks up to NASCAR.

Getting There
Getting to the Shanghai International Circuit was easy.  All we had to do was hop on Line 11 (be sure to take the car going to Anting) and Metro our way to the track.  The track is located a little to the north of where we live, so it took us a little over an hour to arrive.  The good news was we didn’t have to deal with traffic coming or going like most NASCAR races I have attended.  The bad news was many of the other race fans decided to take the metro also, so the cars were a bit crowded.  It was VERY nice to not have to drive, but I did miss the pre race tailgating.

As we ascended the stairs in the Metro Station, scores of race fans and a beautiful Shang shaped racetrack greeted us.

The Fans
Many NASCAR fans are fun loving folks who “pull for their driver” or “pull for a team”.    Most fans wear their driver’s gear, and hang with small groups of friends at the track.

Many F1 fans have elevated the term “fan” to a level of insanity that I had never witnessed prior to this racing experience. 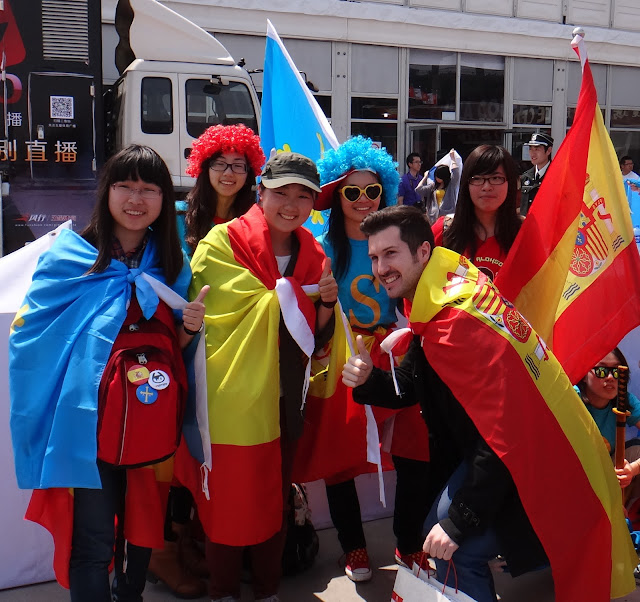 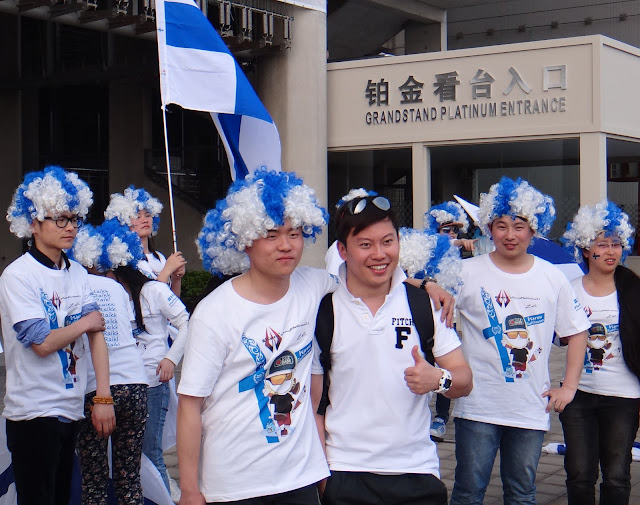 Fans painted their faces, wore clown wigs, and carried the flag of their drivers’ countries.   They marched around in large packs cheering for victory.

Some fans were haters.

I even found a German spiced sausage that was amazing!

However, once we entered the track, the food selections were VERY limited.  My friend, Dan, bought the last six-pack of beer at the stand 10 minutes prior to the start of the F1 race.  The good news is you can bring in food and drinks in backpacks.  So my advice is buy food outside the track and bon apetit!

Qualifying
The concept of F1 qualifying was very exciting.  The drivers sped around the track for three qualifying sessions.  During the first 20-minute session all 20 drivers raced around the field, and the top 15 drivers advanced to session two.  The slowest 5 drivers took the 16th-20th spot on the starting grid.  During the second 15-minute session, the top ten advanced to round 3 and the slowest five drivers took the 11th to 15th place starting positions.  The top ten positions were determined by the fastest laps in the final 10-minute qualifying session.

Unfortunately, the drivers wanted to save their tires, so we spent the first 15 minutes of the first qualifying session watching this.

The same thing happened during the first 10 minutes of the second qualifying session.

I was grateful to see the first Porsche race after qualifying was over.

Pre-Race Entertainment
Sunday morning we were treated to another Porsche Cup race. 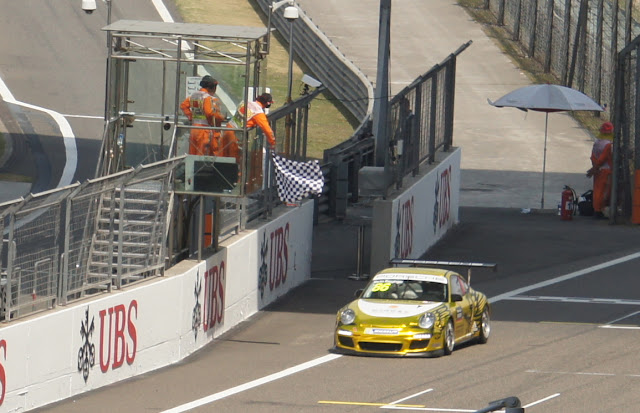 Like many NASCAR events, F1 featured a pre race concert.

The Cars
Compared to stock cars, F1 cars are teeny and have engines that sound like aggressive mosquitos.  However, they are fast!  The fastest car averaged 125 mi/hr.  (Pretty impressive considering all of the turns in the Shang shaped track.)

With the exception of one race, stock cars drive counter –clockwise, and F1 cars drive clockwise around the track.  So as soon as one of the cars pulled on the track Chris yelled,
“Oh no!  He’s driving the wrong way!’  Nice honey.

The Pit Crew
NASCAR allows 6 men to work on each pit crew.  I was amazed to see how 18-20 men easily pulled off 2-3 second pit stops.

The Race Length
NASCAR races can drag out for 3-5 hours depending on weather, race length, and cautions.  The Shanghai F1 race lasts 56 laps or 2 hours, whichever was fastest.  After 56 laps, the drivers definitely left me wanting more! 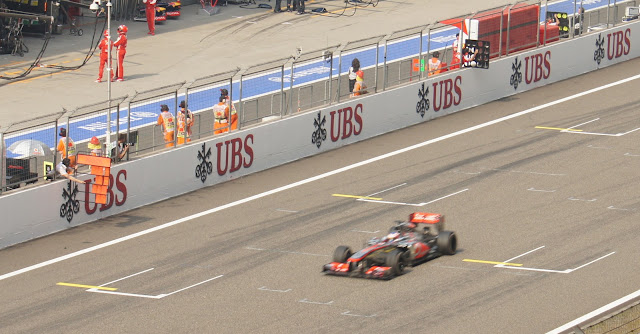 The Podium
In NASCAR, only the fastest driver is recognized in victory lane.  In F1, the top three drivers got trophies and the national anthems of both the driver and the manufacturer were played. 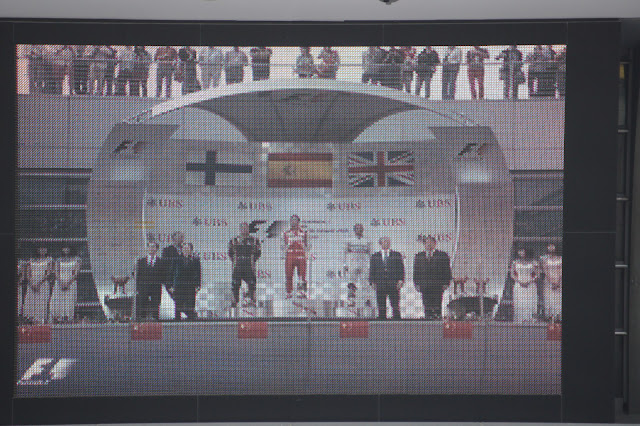 After the anthems, the drivers assaulted each other with champagne.

Overall, NASCAR and F1 are both awesome!  I can’t tell you which I prefer because they are so different, but fulfill my need for racing therapy.  Now let’s go racing!
Posted by Anne-Marie at 8:41 AM

Taking a Walk on the Wild Side…

On Friday Morning, Chris and I decided to take a morning trip to Nanwan Island.  Nanwan Island is the home to over 2000 macaques (a very old breed of monkey).

Nanwan Island (aka Monkey Island) can be reached by taking a gondola on an “overseas ropeway”.

When we stepped off the gondola, we had the privilege of meeting a slew of monkeys!


Long story short, we had a fun time hanging with these cuties!
Posted by Anne-Marie at 10:34 PM

One friend recently gave us a great piece of advice.

“If you are going to survive the fast pace of Shanghai, you need to get away from the city at least once every three to four months.”  I could not agree more.  So to recuperate from the post Chinese New Year blues, we headed to Sanya, Hainan for Qingming (Tomb Sweeping holiday).

I am proud to say for 60 hours, Chris and I did nothing productive.

While on Sanya, we stayed at the beautiful Renaissance SanyaResort and Spa.

In the morning we would eat coconut pancakes for breakfast and then stumble to beach on Haitang Bay.


When we got tired of the South China Sea, we headed to the lagoon pool, where we would laze around for the rest of the day.


Would I go back to Sanya?  I would return in a heartbeat.

But for now, it is back to teaching kiddos! J
Posted by Anne-Marie at 9:39 AM