Since Chris and I had eight days off for Mooncake Festival and Chinese National day, we decided to do what any self-respecting Chinamen would do on a holiday…travel. One of Chris’ Bosch Charleston friends, Christian, lives in Suzhou and invited us to his home for a couple days of exploration, barbeque, and football!  So we sent Ditka and Leia to Jia Liang kennels to play with their puppy friends and we got out of town.

The first part of our adventure was the train ride itself.  A train trip in China was on my bucket list so Chris booked two first class tickets on the G-Train to Suzhou for Monday afternoon.  The G-Train is a bullet train that travels upwards of 200 miles per hour!  Fortunately, a 2-hour car trip was trimmed down to a 25-minute breeze!


Upon arrival to Suzhou we were greeted by Christian, his wife Sabine, and our 13 month old tour guide, Henrick.  We spent the evening catching up over the Lions game.  It was wonderful to settle in with some Charleston friends!


The next morning Henrick suggested that we say good morning to the fish at Jinji Hu lake, so we fueled up on Starbucks and took a stroll.  Many people were out flying kites, riding bikes, fishing, and enjoying the beautiful autumn weather.

After our stroll, Henrick was a little sleepy, so Christian took over tour guide duties and took us to Shangtang St. for lunch and a little shopping.

Stepping on Shangtang St. was like stepping into China 1100 years ago.  The street is lined with traditional Chinese architecture, and people enjoy floating from one end of the street to the other in the canal adjacent to the buildings.  As we were walking, I felt like my high school history book was coming to life.


After our stroll, we headed back to Henrick’s house for the best cheeseburger I have had since I arrived in Shanghai, a little football (soccer) in the backyard, and some American football!  (Short lesson…if you are an expat, the NFL network has a FABULOUS streaming package you can subscribe to overseas.  You can catch every game live, and the site allows you to play any game you like whenever you want to see it! )

The following day, Henrick was a little sleepy so Chris and I decided to take a trip to the Humble Administrator’s Garden solo.  A Ming Dynasty poet who was persecuted by the East Imperial Secret Service developed the garden in the 1600’s.   All the man wanted was to have a place where he could build his own house, plant trees, and grow vegetables, so he worked with a friend to create a beautiful haven in Suzhou.  Today, the garden is owned by the Chinese government and is protected by the UN as a World Heritage site.  Chris and I thought that this would be the perfect place to unleash our inner shutterbug.  Unfortunately, so did half of the population of Suzhou.


After we purchased scalped tickets and shoved through the crowds, we entered one of the most picturesque gardens I have ever seen. 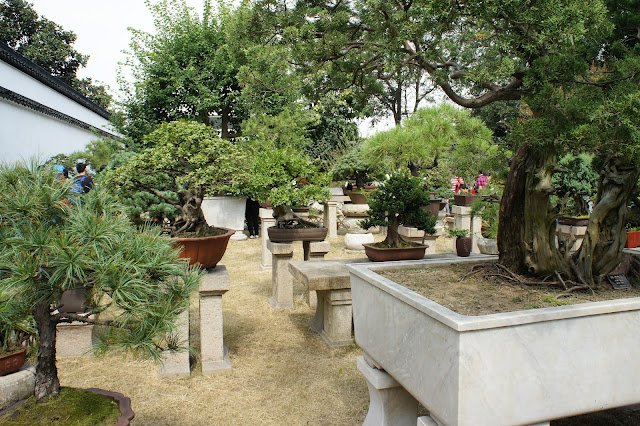 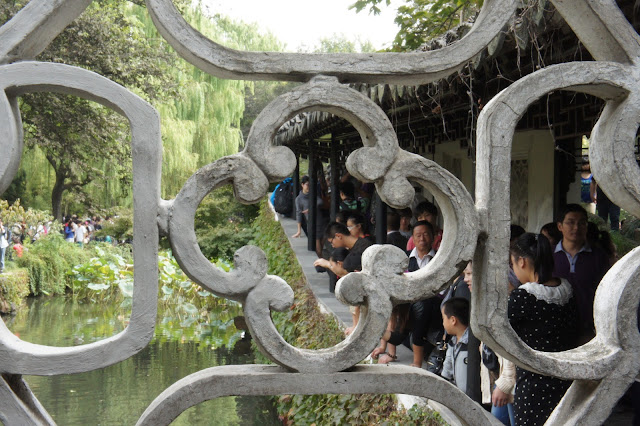 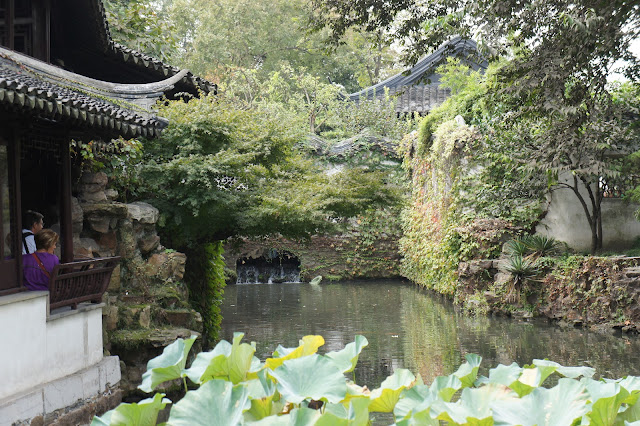 After about 30 minutes, I noticed many lenses and iPhones pointing my way.  Apparently large, blonde (by bottle) women were something of a novelty in these parts.   Eventually, I just started to smile and wave at the cameras.  Mothers approached me wanting me to pose for a shot with their children. Strangers wanted a photo op. I don’t know if I felt like a zoo animal, or a D-list celebrity.  I do know that I take lots of pictures of random Chinese happenings to post on this blog, so perhaps this was payback.  I knew the pictures would be taken regardless of my approval, so I may as well smile and give them something good.

After our garden photo shoot, it was time to grab lunch, do a little more toy shopping and take a 25-minute train trip back home.

Overall, we had a great time.  We enjoyed spending time with friends and exploring new territory.  For the second half of our golden week, we will be tourists in our own city.  Stay tuned!  There is more to come!
Posted by Anne-Marie at 8:54 PM