After 17+ hours in a comfy plane, Chris and I finally made it to Shanghai! Here is the view from our room at the Changfeng Park Marriott. 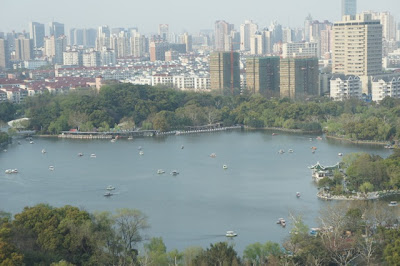 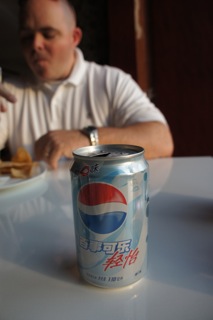 All I have to say is Toto, we are not in Kansas anymore.  Here are some notable differences that caught my jet-lagged attention.

1      Lonely Planet was right; people drive like maniacs.
On the car ride from the airport to the hotel, we almost got in 4 accidents.  It is okay for Chinese drivers to cut any vehicle or human off as long as they use their horns.

2    Chinese Airport Immigration, Security, and Customs are very well organized, but scary.
The airport guards are so scary that they don’t allow you to photograph them.  Hence, I pulled this picture off the web. 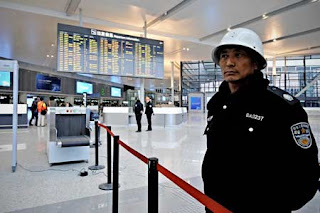 3    Everyone Smokes.
I haven’t seen this many smokers in one concentrated area since before C. Everett Coop put health warnings on packs of cigarettes.

4     It is considered rude for women to wear high heels (YAY!) and/or short sleeves.  (Boo).
According to the guidebook provided by our real estate agent, the Chinese frown on women who show too much.  So I guess the elbow cleavage will have to go into hiding.

They actually show music videos on MTV China.
I guess I am going to have to wean myself from guilty reality TV pleasures like Jersey Shore and Teen Mom.  The cool thing about this is I will more than likely learn the language from the 80’s style music videos.

We are now off to the French Concession area for Easter Mass and brunch!  Happy Easter! Fùhuó jié kuàilè!