Before living in China, it is important to be properly vaccinated.  Hence, I have been injected with close to $1000 worth of vaccines in the past few months.  The good news is that for the remainder of my life I will not be getting Polio, Hepatitis A OR B, Typhoid, Japanese Encephalitis or many other diseases that are transmitted by mosquitoes.  Despite the fact that I am super imunized, I was told by the nice needle wielders at Passport Health that I need to protect myself from malaria and skeeter transmitted diseases by using insect repellent.
Many of you who know me know that I am fillet mignon to mosquitoes.  If there is a mosquito within 5 miles of my house, he or she will inevitably find me.  So in a proactive effort, I decided to give three different insect repellents a spin.  For those of you who are fillet like me...these reviews are for you.
For my test, I decided to give three separate products, Evada Bug, Deep Woods Off Wipes, and Sawyer’s Ultra 30 Insect Repellent a try. 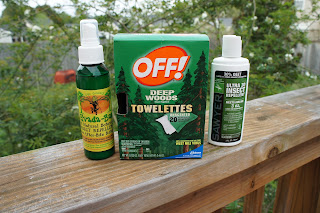 For three nights, I covered my arms, legs, hands, neck and face with each of the aforementioned repellents.  I would then sit out on my deck (skeeter heaven) for at least 30 minutes, then go inside to assess the damage.  I am very happy to say that I did not get a single bite in the testing process, but I do feel the need to report the pros and cons of each repellent.
For Sunday night’s test run, I applied Evada Bug. 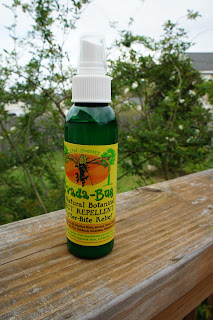 Evada Bug is an all natural insect repellent that is sold at our local Piggly Wiggly.  (Yes Yankee friends, I do shop at ‘The Pig”.  Don’t judge.)  I took the green bottle and liberally applied the spray in my kitchen.  It is an oil based spray, so my floor quickly turned into an ice-rink.  Despite the fact that the repellent had no DEET, it did it’s job.  It even repelled my husband!  (I think his exact quote was ‘you smell like a hippie’.  Honestly, I thought the same thing.) Long story short, Evada Bug is stinky, all natural, and effective.
For Monday night’s test, I tried the Deep Woods Off Wipes. 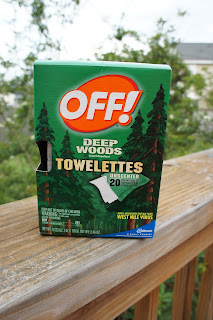 The smell of the Off brought back memories of Girl Scout Camp at Bee Tree Park.  I know that this stuff is tried and true.  I was even more excited that the skeeter fighting power that one finds in a can is now accessible in a wet nap.  (VERY cool for TSA purposes.)  I opened up a pouch and covered myself with OFF goodness.  I need to admit that I was disappointed that the wipe was dry after 20 seconds of air exposure.  The good news is that for a second night I did not get eaten alive.  I am also happy to report that I did not repel Chris either!  Mission accomplished!  Yeah for DEET!
For Tuesday night’s test, I tried Sawyer’s Ultra 30 Insect lotion a shot. 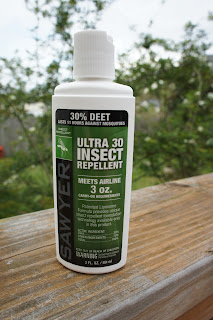 This is the lotion the Passport Health folks sold me when I was still in shock over the move.  (I know, I am a sucker.)  I opened the bottle, and a white substance that resembled mayonnaise squirt out of the bottle.  Good news...it was odorless.  I took a seat in my deck throne and waited for the skeeter attack.  Nothing!  What validated the effectiveness of this product is that the mosquitoes were biting Chris!!!!!!!  I know I should not be happy about this, but you gotta love it when a test goes your way.
So which one will I be taking to Shanghai?  More than likely all 3.  A Girl Scout needs to be prepared, right?