A Merry Little Chinese Christmas: Our Christmas in Pictures

Chris and I have officially survived the 48-hour cheer fest known as Christmas.

Christmas was going to be a little different this year. In China, Christmas is not an official state holiday, so I had to teach on Christmas Eve and Christmas Day.   Since I could not celebrate at home, I decided to bring Christmas to my kids.

On Christmas Eve morning, I was greeted with this fabulous tree at school.

My students had a fun day of singing Christmas Songs (can’t call them carols here), and playing holiday games.

After work, Chris and I headed to Shanghai Slim’s for a Christmas Eve Dinner.  The food was as good as it looked.

After dinner Chris and I went to Christmas Eve Mass at St. Ignatius.  I can now say I survived my first inter-species midnight mass.


The next morning we woke up to find that Santa had visited us in Shanghai!  I was SO happy that he brought me Hidden Valley Ranch salad dressing mix and many pairs of shoes!

After opening gifts, we listened to my Dad read my niece the Nativity Story from the Bible via Skype.  I was so happy I did not miss this family tradition.

Chris and I then had a yummy pancake and bacon brunch, and set out to spread more Christmas cheer in my schools.

For our first stop, we watched the “Little Red Riding Hood” dress rehearsal at my middle school.

Unfortunately, I was not able to see the final performance because I had to teach at my afternoon school.  St. Nick was going to visit my kids!

After work, we headed to Christmas dinner with some new friends, Skyped my Griffith and Philly families for their Christmas mornings, and finally went to bed.

Overall, it was a great Christmas!  Merry Christmas everyone!
Posted by Anne-Marie at 8:57 AM

To Market We Go…

After my Easter experience, I was afraid that Christmas in Shanghai would be like Whoville after the Grinch stole all the trimmings and trappings. I am happy to report I was wrong; the Chinese know how to spread Christmas cheer (in an extremely secular way).

One way the Chinese celebrate the holiday season is by housing European style Christmas markets.  Once I spotted these markets on Smart Shanghai, I needed to check it out!

The first market Chris and I visited was the Christkindlmarkt on Fenyang Rd.
According to Chris, this market was extremely similar to the German Christmas markets in Stuttgart.  I think every German living in Shanghai came out to experience a bit of home.  For a couple of hours we got lost in the land of Christmas trinkets, brats, and gluhvein.

While we had a great time at Christkindlmarkt, we didn’t find the decorations we wanted.  So the following weekend we headed to Yu Gardens to check out their loot.

Yu Gardens looked like the North Pole had bombed it.  Garland and ornaments were everywhere. 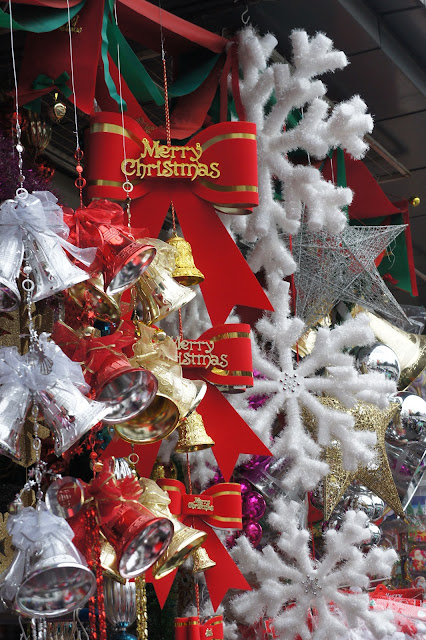 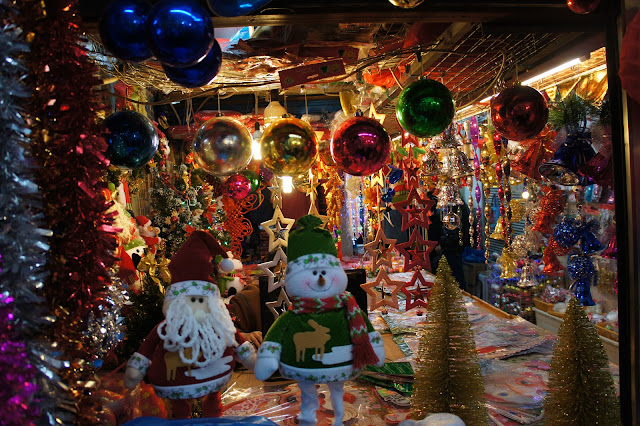 After taking our first lap around the market, I took Chris to the restaurant where I had my first Yum Cha date.  There was a little more talking than my first time dining here.


After lunch, it was back to shopping.
Luckily we were able to pick up some decorations for our door.
While Yu Gardens was nice, there was one more market we wanted to visit, the Shanghai Christmas Market at Xintandi.
While the lights were nice, many of the vendors were not exactly festive.

Overall, we had a good time at the markets.  They put us very much in the holiday spirit.
Posted by Anne-Marie at 1:08 PM

One of the perks of being an American English teacher in Shanghai is I have been encouraged to teach kids about American holidays!  So, what had previously been a two-day holiday of eating and shopping turned into a four-day celebration of gratitude!

The party actually started on Thanksgiving Day itself.  The idea of teaching on a day when I should have been basting a bird did not put me in the best of moods, but I got over my attitude pretty quickly.   For the entire day, I showed a PowerPoint containing pictures of a glistening turkey, recited the poem “Ten Little Turkeys”, and even passed on the tradition of making hand turkeys!  It was difficult to stay grumpy when teaching about gratitude.

After a full day of teaching, Chris and I decided to celebrate Turkey day Shanghainese style.  We went out for Beijing Duck at Lao Beijing!

The next day, I completed another round of Powerpoints and thankful hand turkeys so I was ready to celebrate by the end of the day.  We kicked off our weekend with an Elton John concert.

On the way to the concert, I bumped into the author of one of my favorite expat blogs, Donuts to Dumplings. Her blog was one of the first that I read before moving to Shanghai, and her posts have been extremely helpful with getting settled.  If you would like to see another family going through what Chris and I are experiencing, I would take a look.

Sir Elton was in fine form.  For a little over three hours, we rocked out to classics like “Bennie and the Jets”, “Crocodile Rock”, and “Saturday Night”.  Both he and his opening band left us wanting more.

After sleeping in on Saturday, we headed over to my friend Meg’s place for Thanksgiving part one.  Her meal was nothing less than awesome! Too bad we didn’t have enough food. J

It was fun to pig out on turkey and pass out while watching National Lampoon’s Christmas Vacation, but we had to pace ourselves.  The next day would be Thanksgiving celebration number two at our house for more of our expat friends.

This turkey day gathering was one of the easiest I have thrown.  Since ovens are hot commodities over here (pun intended), many grocery stores and restaurants deliver full Thanksgiving dinners.  So I cooked my turkey by ordering it online.  At 10:30, a nice man delivered a big juicy bird, gravy, stuffing, pumpkin pies, and rolls in a Styrofoam warmer.  Throw in a salad, mashed potatoes, mac and cheese, roast veggies, home made pierogies, cranberry sauce, apple cobbler, some home brewed beer, and some great friends and you have the recipe for an awesome Thanksgiving.

After 10 hours of food, fun and games it was time to hit the sack.  I can say that my first international Thanksgiving was one I will always remember.
Posted by Anne-Marie at 12:46 PM